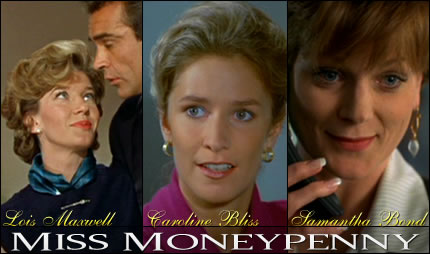 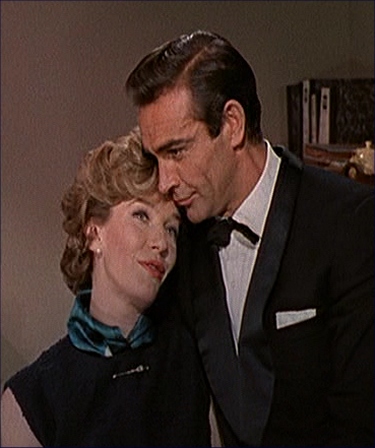 Miss Moneypenny played by Lois Maxwell appears in fourteen James Bond films from Dr No up to and including A View To A Kill. In Dr No, Miss Moneypenny establishes the relationship with Bond that would remain for the next twenty-three years. In From Russia With Love, Miss Moneypenny still attempts to seduce James Bond but to no avail.

Moneypenny furthers her attempts to get Bond to visit her by promising to bake him a cake in Goldfinger, but Bond politely declines however when he tells her he has a business appointment. After telling him that's the flimsiest excuse he has even given, M calls through on the radio telling Moneypenny that Bond is dining with him tonight, giving her renewed hope.

Miss Moneypenny continues her flirts with Bond in Thunderball, although is caught out by M when she refers to him as 'the old man'. In You Only Live Twice, Miss Moneypenny tries to trick Bond into repeating his Japanese SIS codeword (“I love you”) to her, but Bond gets wise to the plan. Moneypenny gets some comfort however in following M's orders to tell Bond to report whilst Bond enjoys a romantic moment with Kissy Suzuki.

On Her Majesty's Secret Service showcases perhaps the most important and impressive Miss Moneypenny scenes for Lois Maxwell. After telling Moneypenny to hand in his resignation into M, Bond is upset and disappointed when M approves the memo without comment; that is until Moneypenny advises him to read the memo – two weeks leave. In an emotional scene at Bond's wedding, Bond throws his hat at a crying Moneypenny before leaving for his honeymoon. Diamonds Are Forever sadly features only a small scene with Miss Moneypenny. Appearing as a customs officer at Dover, Moneypenny works with Bond to take on the identity of Peter Franks. When asked if he can bring her anything back from Holland, Moneypenny replies to Bond, “A diamond, in a ring” leaving him to comment “would you settle for a tulip?”

Live And Let Die only features Miss Moneypenny in a short scene where she helps Miss Caruso hide from M in Bonds closet. After she thinks she has a chance in The Man With The Golden Gun after Bond calls her 'darling', she sulks into M's office when Bond is only trying to get information from her. Once more Miss Moneypenny is barely seen in The Spy Who Loved Me who appears in two extremely short scenes. Sadly, once again Moonraker fares badly for Miss Moneypenny who appears in only a couple of very small scenes. For perhaps the first time Moneypenny flirts with Roger Moore's James Bond in For Your Eyes Only, like the excellent scenes with Sean Connery's Bond.

Octopussy marks the penultimate appearance of Lois Maxwell's Miss Moneypenny. Bond is treated to a delight when he sees the beautiful Miss Penelope Smallbone, Moneypenny's new assistant. Bond amusingly covers his interests in Miss Smallbone by not too convincingly telling Moneypenny how beautiful she also is. Unfortunately A View To A Kill marks the last appearance of Miss Moneypenny played by Lois Maxwell. She does however end her famous participation in the Bond series by accompanying Bond, M and Q to the horse racing at Royal Ascot where she gets perhaps too involved in the racing!

Secretary to M, Miss Moneypenny is always happy to welcome Bond for his meeting with M. Since Dr No, Miss Moneypenny has held a special relationship with Bond, flirting with him at any opportunity, hoping the world's most famous secret agent will succumb to her charms.

Lois Maxwell is the classic Moneypenny. Her scenes with Bond are comical and always welcome in the film. Bond enjoys her numerous flirtations, however their relationship never goes any further. Her portrayal of Moneypenny is loyal, caring, hoping (!) and a very good friend. She is always the first person to help Bond if she can, and does so on many occasions. §