Not only opera-goers from all over the world were enthusiastic about the spectacular Bregenz staging of Puccini's opera thriller Tosca in the summer of 2008. In July 2007, a team from EON Productions, the company that makes the Bond films, attended one of the final rehearsals of Tosca. Producer Barbara Broccoli and director Marc Forster were profoundly impressed – by the unique location on the shore of Lake Constance, the imposing stage set with its high level of technical sophistication, and the modern architecture of the Festival Opera House.

For ten days, the Bregenz production of Tosca became a location for shooting the latest Bond movie, Quantum of Solace, which made it to the cinemas in November 2008. In a seven-and-a-half-minute sequence of exciting action in the Festival Opera House and on the Floating Stage, Bond discovers his adversaries for the first time, during a performance of Tosca. The Bregenz production doesn't only furnish the film with some spectacular images – Puccini's music also provides a dramatic soundtrack.

Director Marc Forster incorporates the opera on the Floating Stage into the plot in his own special way: the chase through the Festival Opera House at the end looks like an apocalyptic silent film – interspersed with striking scenes from the opera.

Forster succeeds in highlighting parallels between the plots of the movie and the opera. In both Quantum of Solace and Puccini's Tosca, revenge is the central motif. Tosca's murder of Scarpia at the end of the Bregenz sequence seems to suggest what is going to happen in the film.

"Bregenz and the Bregenz Festival will profit enormously from this film because the Bond film-makers have managed to capture perfectly on screen the unique atmosphere of the opera on the Floating Stage. The Bregenz sequence ends with perhaps one of the most beautiful gunfights that I have ever seen in a film: a perfectly choreographed, silent action movie accompanied by Puccini's dramatic music," commented a visibly impressed German journalist.

"The aria drowns out the hail of bullets" 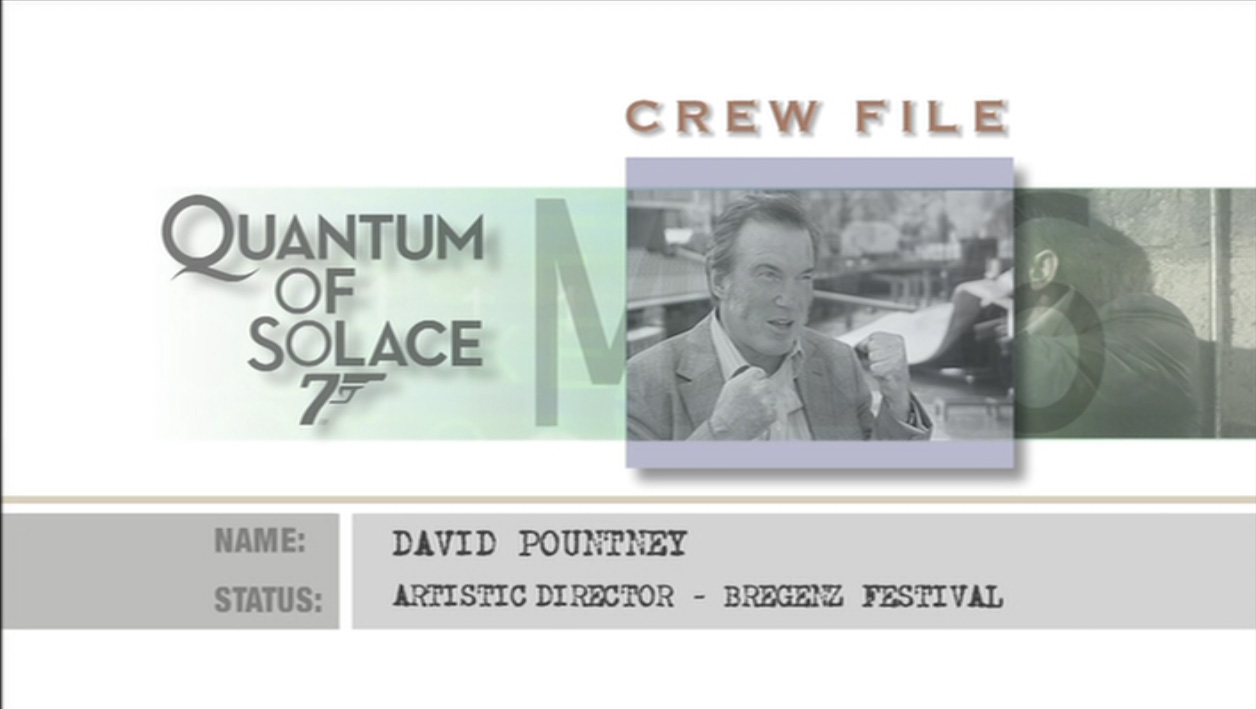 What is true of the new style of Bond movies since Casino Royale holds true for the operas on the Bregenz Floating Stage, too – sensational effects with depth, opera action with a thrilling background.

For the film-maker and screenwriter Marc Forster, the scene that takes place in the middle of Tosca on the shore of Lake Constance was a special opportunity to give full rein to his artistic potential – which would certainly make him an excellent director for the Floating Stage. "With evident pride Forster watches a sequence in the new film, which takes place against the backdrop of a Tosca performance on the Bregenz Floating Stage,“ the latest edition of the news magazine "Der Spiegel" writes in a portrait of the director. "A fierce gun battle breaks out, but Forster only shows fragments of it, preferring to stay with the opera. The aria drowns out the hail of bullets."

"The images of the Bregenz Tosca that can be seen in Quantum of Solace are spectacular, but not only that. The plot is action-packed, but even in the midst of the fiercest gunfight Forster lets the action of the opera on the Floating Stage continue: "This artistic intent is new in the Bond film series. Action before never meant anything other than action. (…) Forster by contrast stylises the shoot-out as a fascinating ballet of death, and Bond is just one of the dancers,“ commented "Der Spiegel".  http://presse.bregenzerfestspiele.net/en/bond-quantum-solace-20080520-0 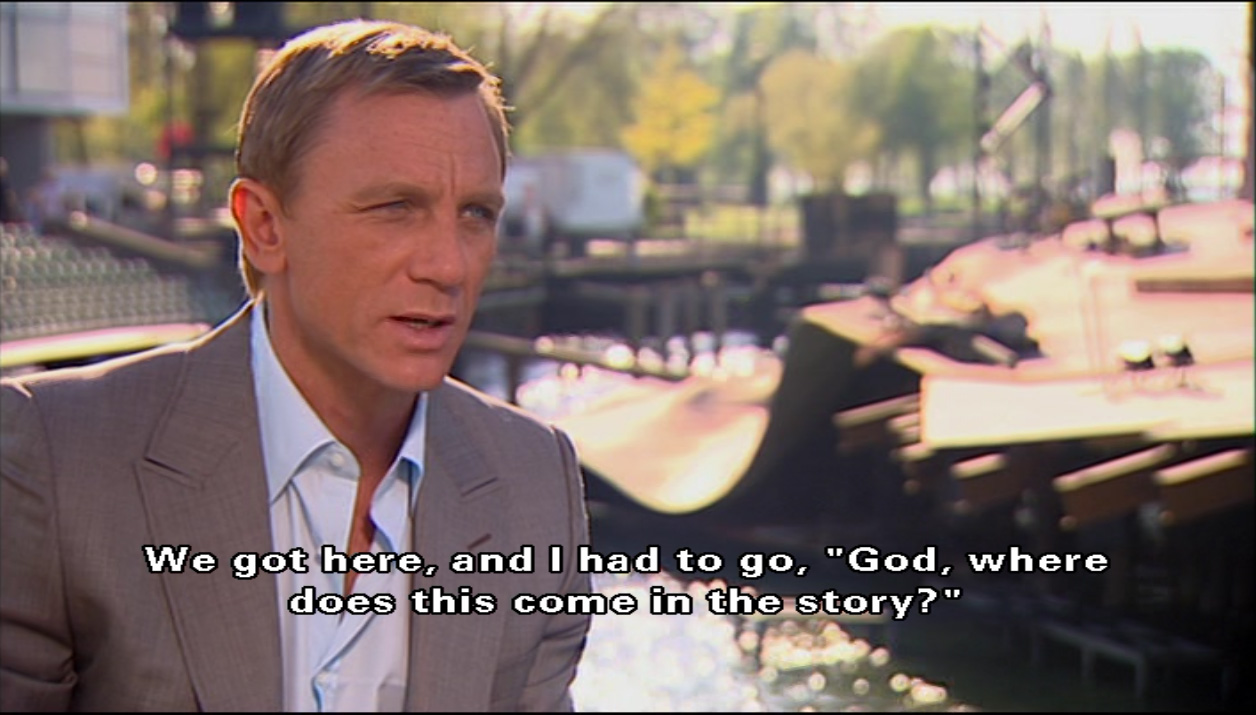 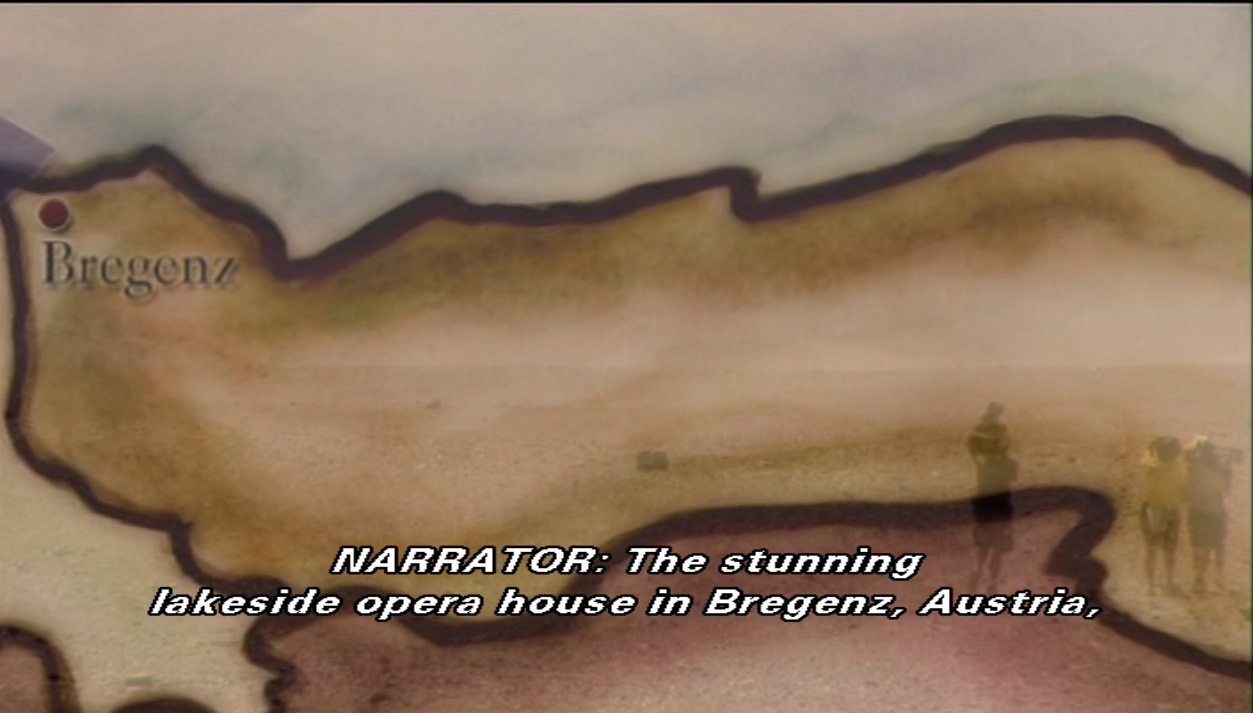 Daniel Craig as James Bond in Quantum Of Solace 2008

Bregenzer Festspiele (Bregenz Festival) is a performing arts festival which is held every July and August in Bregenz, Austria
Founded in 1946, one year after World War II, the festival presents a wide variety of musical and theatrical events in several venues
Over April and May 2008, scenes for the 22nd James Bond film Quantum of Solace were filmed on the Seebühne during a performance of Tosca

The scene from the opera, where Bond discovers that Greene has a secret meeting with some of the world's most powerful people,was recorded during two weeks of night-time shooting
in Bregenz in Austria.
Here they filmed the famous scene that was built up to the set of Tosca 2007/2008.
The current cast performed the opera on a floating stage on Lake Constance, a scene with a giant blue eye in the background.
More than 1000 extras were dressed up in tuxedos and evening gown to fill up some of the mighty amphitheater that can accommodate up to 7000 spectators. 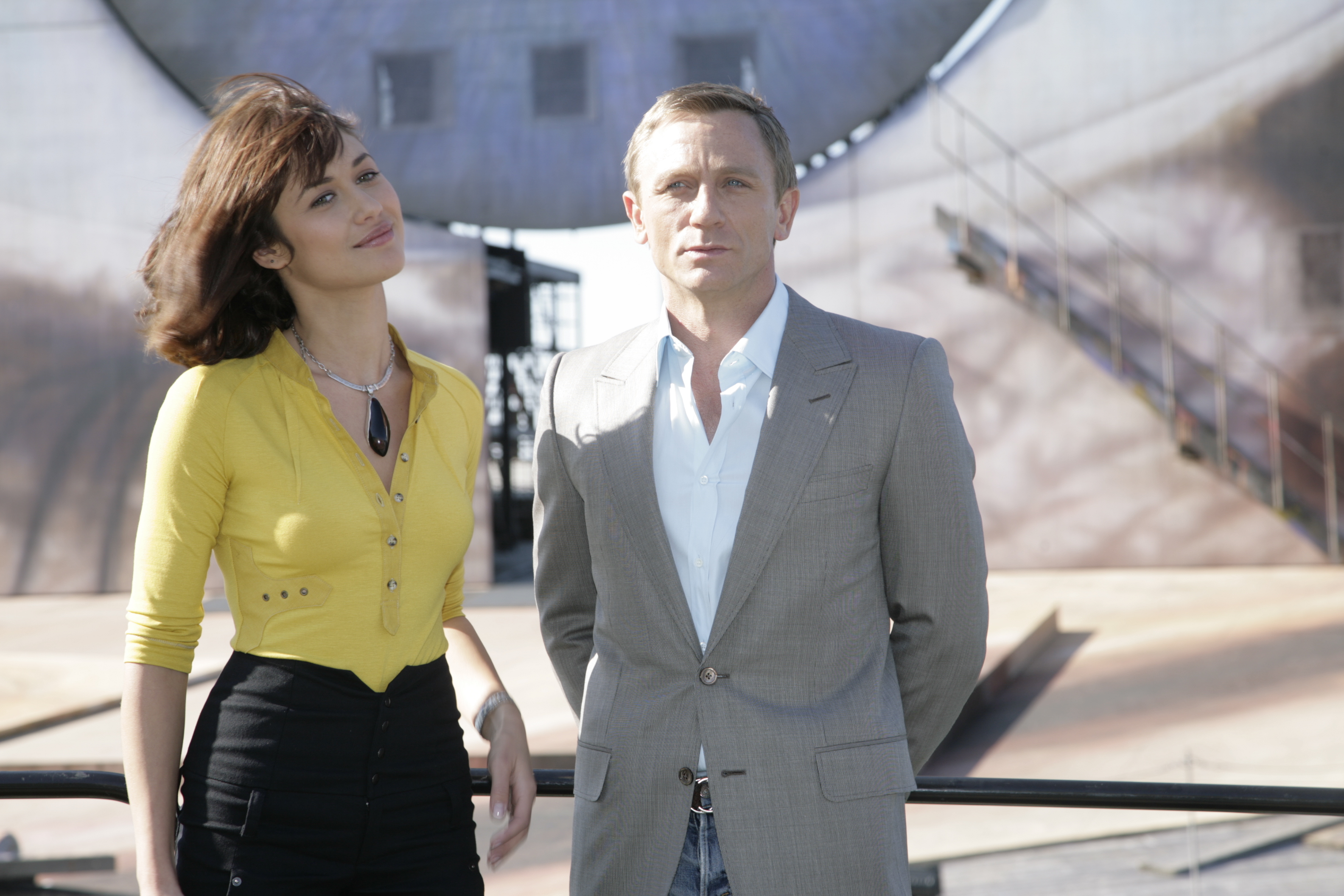 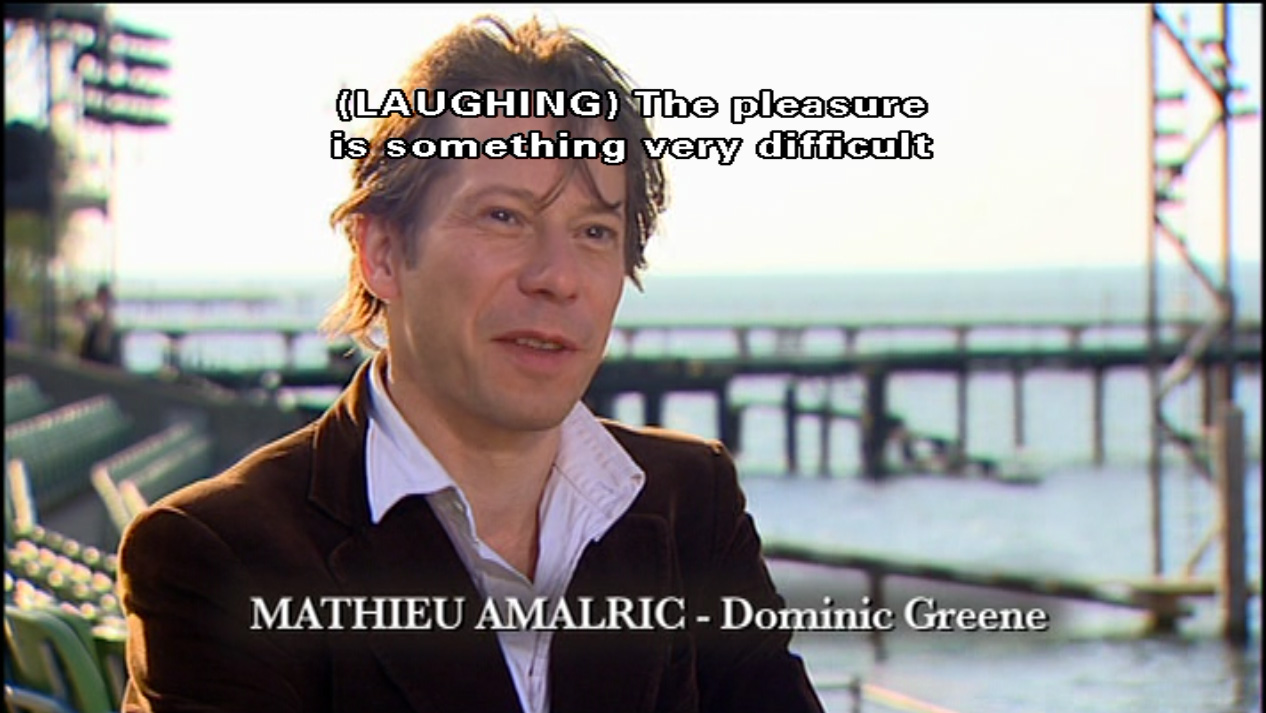 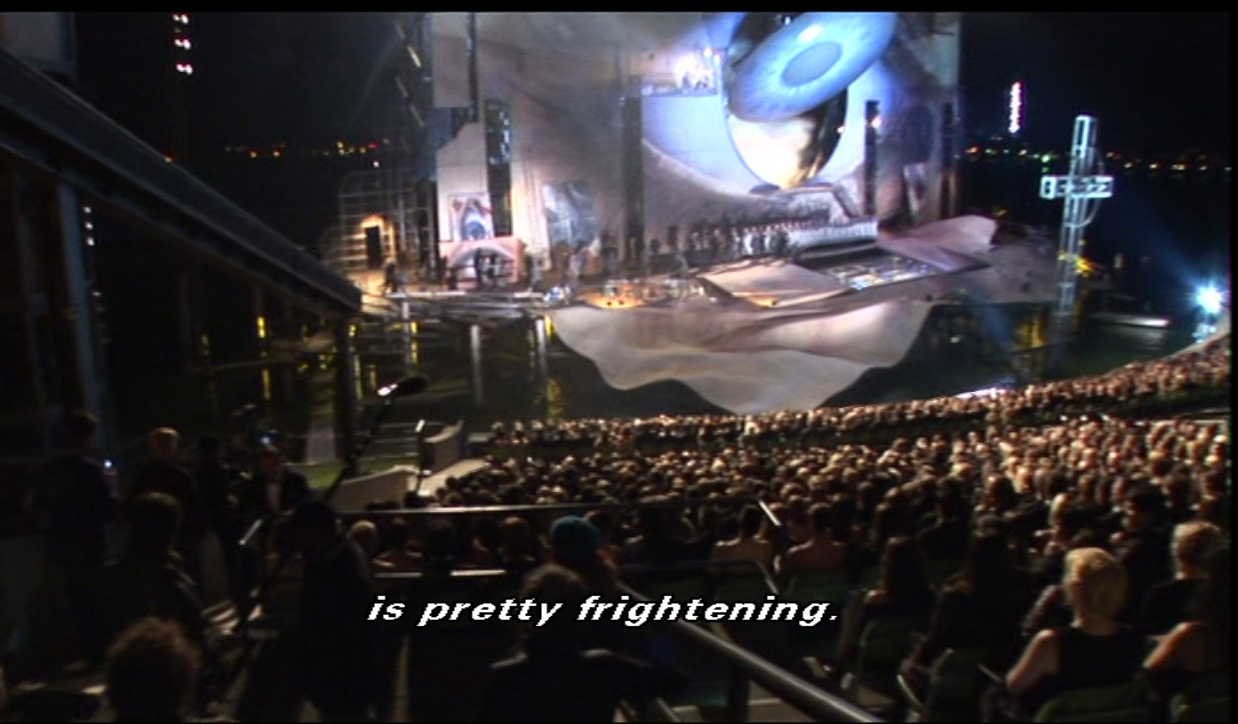 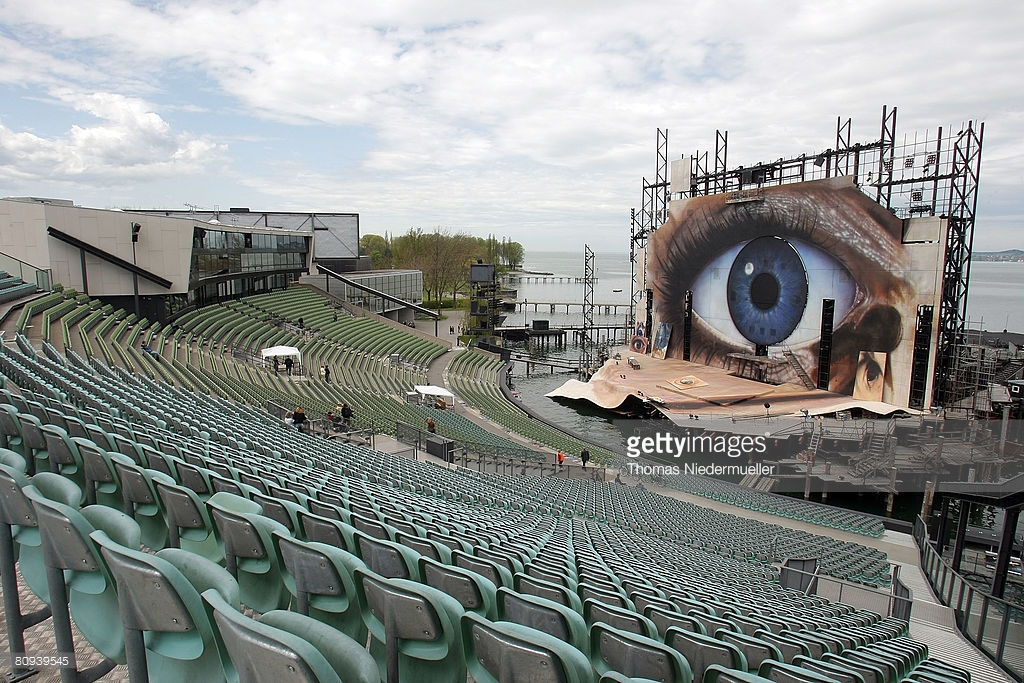 "Bregenz and the Bregenz Festival photo